Arrive in Cali's International Airport, most likely in the late evening, where your tour leader and personal driver will be waiting for you. We will lodge nearby at El Faro where we will freshen up and have a choice of natural fruit juices. 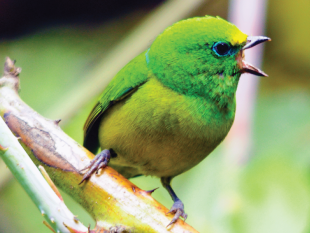 In the morning, we will bird at the higher elevations of the Bosque de San Antonio. Possibilities include purplish-mantled, Golden, White-lined, Scrub, Fawn-breasted, Summer, Metallic-green, Saffron-crowned, and Golden-naped Tanagers, as well as Ashthroated Bush-Tanager and Blue-winged Mountain-tanager. Two endemics that we will search out are Grayish Piculet and Multicolored Tanager. Other birds we might see in this area include, Scarlet-fronted parakeet, Crimson-rumped Toucanet, Fulvous-dotted Treerunner, Streak-capped Treehunter, Scaled Fruiteater, Green and Black Fruiteater, Yellow-headed Manakin, Chestnut-breasted Wren, Black-billed Peppershrike, Chestnut-breasted Chlorophonia, Greenish Puffleg, Montane woodcreeper, Redfaced Spinetail, Spotted and Rusty-winged Barbtails, Streaked Xenops and Narino Tapaculo. Along one of the roads, we will visit El Esdrujal, a local peasant home who maintains feeders that attract an impressive show of hummingbirds. The following species have been observed at the feeders. Purple-throated Woodstar, Blue-headed Saphire, Brown Violetear, Green Violetear, Fawn-Breasated Brilliant, Speckled Hummingbird, Wedge-billed Hummingbird, Long-tailed Sylph, White-necked Jacobin, and Long-billed Starthroat. In the evening of Day 1, we will visit a Cock-of the Rock Lek and admire the flamboyant male displays. 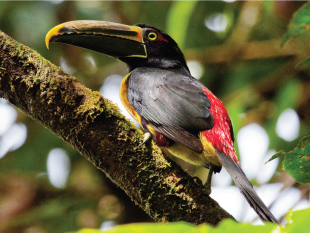 San Cipriano is a small town located approximately 10 minutes inland from the port of Buenaventura. We arrive at the town of Cordoba in the early morning. From there on we will take a unique mode of transportation known as "the Brujitas", homemade train carts powered by motorcycles to travel on the railroad tracks to the town of San Cipriano. Upon arrival, we will then cross the picturesque town and see a nesting colony of Chestnut Oropendolas and the conspicuous and near-endemic Lemon-rumped Tanager. Upon entering the Natural Reserve possibilities include Rose-faced Parrot, Purple-throated Fruitcrow, Golden-collared Manakin, Chestnut- mandibled and Chocó Toucans, and Stripe-billed Araçari. Other specialties of the area include Masked Tityra, and Cinnamon and Crimson-bellied Woodpeckers. Towards the end of the morning, we will have the opportunity to bathe in the crystal clear waters of the San Cipriano River and relax before returning to the town for a typical Fish Sancocho. In the afternoon, we will head towards Buga, a small city with loads of history. Those who wish, can tour the city or choose to relax by the pool at the hotel Guadalajara. 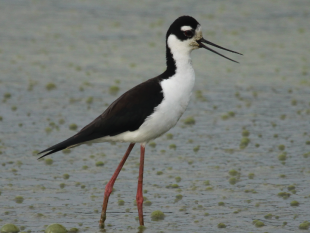 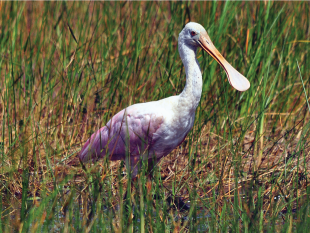 We will rise early and be at the Sonso Lagoon in ten minutes. The lagoon, encompassing 1900 acres, is one of the only remaining wetlands in the Cauca Valley and one of Colombia's best wetland birding localities. We will search the waters for Wattled Jacana, Anhinga, Little Blue, Cocoi and Striated Herons, Snowy Egret, Bare-faced and Glossy Ibises, Fulvous and Black-bellied Whistling-Ducks, Cinnamon Teal, Osprey, Snail Kite, Black-necked Stilt, Neotropic Cormorant, Lesser and Greater Yellowlegs, and Spotted and Least Sandpipers. Rare species we might come across include Pinnated Bittern, Apical Flycatcher, Roseate Spoonbill, Ruby Topaz and Horned Screamer. Along riparian areas it is possible we see Southern Lapwing, Greater Ani, Ringed Kingfisher, Northern-Crested and Yellow-headed Caracara, Spot-breasted Woodpecker, Southern Beardless and Mouse-coloured Tyrannulets, Yellow Warbler, Yellow-olive Flycatcher, Grey and Ruddy-breasted Seedeaters, Blue-black Grassquit, and Cinereous Becard. In nearby oxbows (called madres viejas in Colombia) we will also be able to observe the attractive Jet Antbird, Orange-crowned Euphonia, and Slate-headed Tody-Flycatchers. After a long morning of birding (in hot weather) we will have lunch at a nearby restaurant that has some of the best chicken sancocho (typical Colombian soup) I have ever had. Then we will return to the hotel for a couple of hours of relaxing and swimming before leaving Buga towards the Otún Quimbaya Reserve (3.5 hrs). 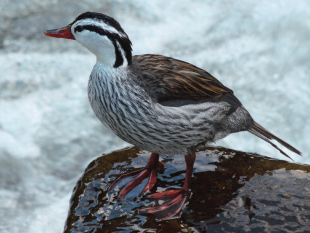 Otún-Quimbaya is located on the central Andes near the city of Pereira and is a Flora and Fauna Sanctuary holding a wealth of avifauna. From our lodgings, we may be able to have close-up views of the endemic Cauca Guan and Red-ruffed Fruitcrow. With luck we will also spot the occasional howler monkey family foraging high in the canopy. Along the road, we'll see a number of mixed foraging groups. We'll look for Plumbeous-crowned Tyrannulet, Rufous-breasted Flycatcher, Inca Jay, Black-billed Peppershrike, Marble-faced and Variegated Bristle-Tyrants, Highland Motmot, Black-billed Mountain-Toucan, Red-ruffed Fruitcrow, Golden-fronted Redstart, Blue-naped Chlorophonia, Orange-bellied Euphonia, and Glossy and Masked Flowerpiercer. At the end of the road, we may see pairs of Torrent Duck. On the second day, we will look for targets and specialties we may have missed on the first day. After a productive morning of bird watching we will have lunch at an Argentinean Grill and indulge on some of the best selection of meats in all of Colombia. After lunch, we will travel to the Rio Blanco Reserve where we will be staying in basic but clean quarters attended by very gracious hosts. the local hotel and/or a guesthouse. Depending on arrival time, we will have an opportunity to visit the Antpitta feeding station and have the privilege to watch these secretive birds up close. 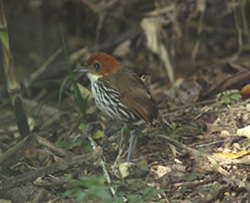 The Rio Blanco Reserve is managed by Aguas de Manizales, the municipal water company. The city is in the center of the famed Coffee Triangle, and is a great city from which we can visit several reserves that hold some of Colombia's rarest and most threatened species. WE WILL have a unique opportunity to see the secretive antpittas at a feeding station again, including the endemic Brown-banded Antpitta and the Chestnut-crowned and Bicolored Antpittas.

During our morning coffee, up to 20 species of hummingbirds may bee seen visiting the many feeders that surround the lodge. We may also get a good look at the Black-billed Toucan, Sickle-winged Guan, and the target Masked Saltator right from the balcony. A walk up the reserve will allow possibilities like the Rusty-faced Parrot, Tyrannine Woodcreeper, Golden-faced Redstart, Dusky Piha, Black-billed and Buff-breasted Mountain-Tanagers, Grass-green and White-capped Tanager, Chestnut-naped Antpitta, Rusty-faced Parrot, Powerful Woodpecker, the hard to see Ocellated, Blackish and Spillman's Tapaculos, Black-billed Peppershrike, Plushcap, Mountain Cacique, and Golden-plumed Parakeet. After a good days birding, we will head down to Manizales where we will lodge at Termales del Otoño. 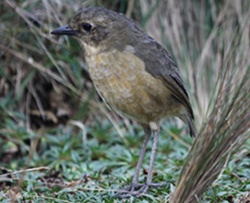 The road to Los Nevados National Park begins in the bustling college town of Manizales, where on a clear day the magical Nevado del Ruiz is visible. Birding is done along the lightly traveled road that winds up the mountain through patches of forest that give way to paramo (tropical grassland above tree line). The scenery is delightful, with velvety frailejon plants adding a touch of surrealism to the experience. We will seek out high elevation specialists that include: Bearded Helmetcrest, Rainbow-bearded Thornbill, Viridian Metaltail, Stout-billed Cinclodes, Brown-backed Chat-Tyrant, Golden-crowned Tanager, Black-backed Bush-Tanager, Glossy Flowerpiercer, and the endemic and very hard to find Rufous-fronted Parakeet. We will search for this endemic along a 2 km. stretch of the road that passes through elfin forest. Also fun to watch are the Tawny Antpitta, who are very tame in this area. We will also be able to bird near a glacial lagoon called Laguna Negra, where it is possible to see Many-striped Canastero, White-tailed Hawk, Black-chested Buzzard-Eagle, Andean Tit-Spinetail, White-chinned Thistletail, Andean Duck, Andean Teal, Grass Wren, and Pale-naped Brush-Finch. A bonus is the variety of seed eaters in the Paramo, including Plumbeous Sierra-Finch and Paramo and Plain-colored Seedeaters. After a day of birding we will down and stay at Termales del Otono for the night, where we can enjoy thermal pools in a private setting.

Day 11: Flights from Manizales homeward or to extension tour locations